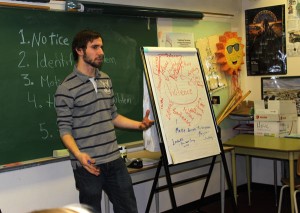 This year’sÂ MOVE! workshop series in Whitehorse finished up Tuesday night. For the past three weeks, youth gathered in Whitehorse to tackle the issue of violence in the Yukon. Participants listened to talks, shared their experiences, and discussed different types of violence and how it affects them. We had an unprecedented amount of youth sign up: this yearâ€™s group was about 20 people strong, whereas last yearâ€™s group had only around 10 people.

Throughout the five sessions, we discussed everything from anti-oppression, bullying, and physical violence to sexual orientation and gender stereotyping. On the third session, we handed things over to group participants to create their own films depicting violent scenarios and more positive outcomes. Simon Dâ€™Amours from World Wild Media came to give participants tips and tricks on filming techniques, angles, and editing. One participant said her favourite part of the workshops was making the videos.

â€œIt was good to have a project, something to work onâ€ she said.

The video making seemed to be a highlight for other participants as well. At the end of the five sessions, each youth received a DVD copy of the movies that they and their peers created.

In addition to discussions and group activities, we also had Brenda Barnes from the Womenâ€™s Directorate come and deliver a talk on gender stereotyping and how to deal with the bullying that arises from it. Youth brainstormed the gender stereotypes that theyâ€™ve heard or used, and discussed how it affects them and others.

In addition to all the serious stuff, we played games, got to know each other, and enjoyed a good meal every night. Thanks to Matt, our intern, for slaving away in the kitchen to make the meals!

We at BYTE are excited to call this yearâ€™s MOVE! series a success, and canâ€™t wait to expand and improve it for next year. Thanks to everyone who participated. Weâ€™re so glad you came out!

Thank you to United Way Yukon for their support in this project!