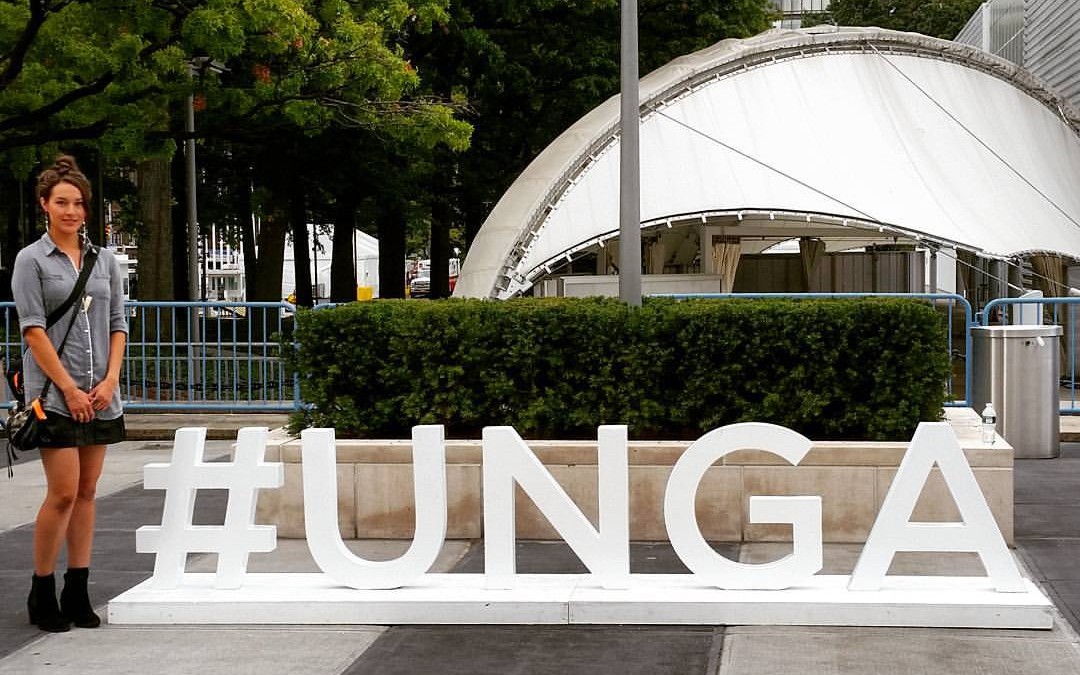 Watsiye (Hello)! My name isÂ Angela Code. I am a 27-year-old Sayisi Dene First Nations woman originally from Tadoule Lake, northern Manitoba and I just returned from the United Nations Sustainable Development Summit 2015 in New York City. Â I was one of eight Canadian youth who attended the summit and my role was to represent theÂ Northern Council for Global Cooperation. I am very grateful and honoured to have received the opportunity and support to attend the UN Summit. 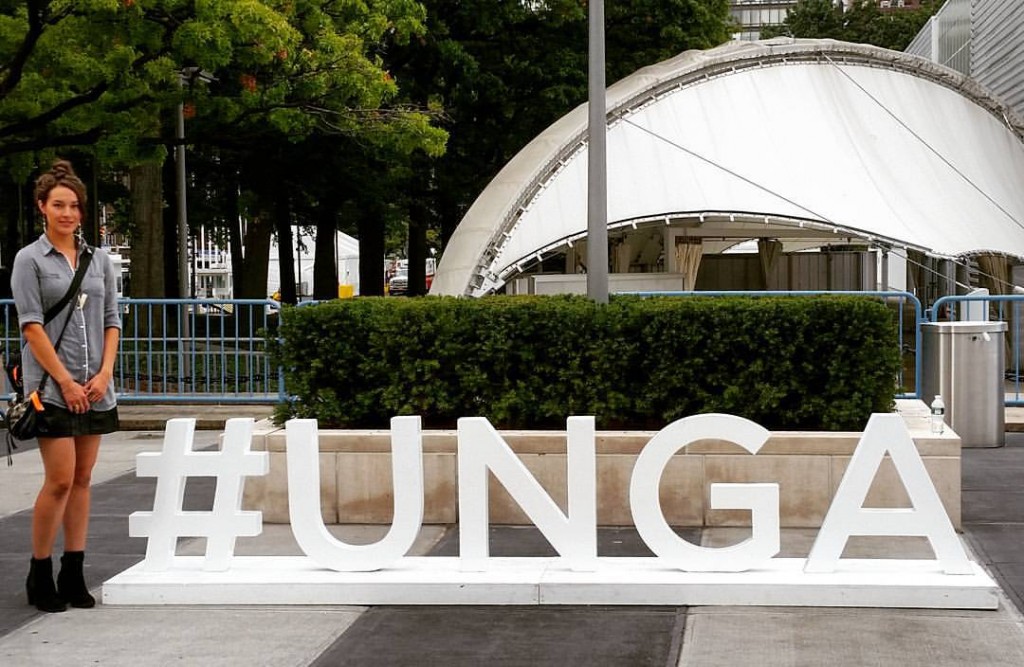 The UN Summit was a meeting of world leaders and young delegates from across the globe to discuss sustainable development goals. The UN has 17 sustainable development goals (SDGs) and 169 targets that theyâ€™re currently seeking to achieve over the next fifteen years. The goals target areas of critical importance for humanity and the planet. Examples of these goals are ending global poverty and hunger, protecting the planet from degradation, taking action on climate change, ensuring that all human beings can enjoy prosperous and fulfilling lives, and fostering peaceful, just and inclusive societies. One of the main goals is to implement this agenda through a revitalised Global Partnership for Sustainable Development.

It was very inspiring to be surrounded by the motivated and passionate humanitarians and environmental activists at the UN Summit. I hope that the world leaders agree to Â work hard to see the SDGsÂ fulfilled by 2030. In a recent blog post written while in New York, our Canadian Youth Delegation mentor Michael Simpson stated â€œWe can be proud ofâ€¦[Canadian] civil society efforts and our consistent messages that align with the global agenda.â€ However, Simpson argues that in recent years, Canada has â€œslipped on the international stage with climate change, [as well as] addressing poverty at home and abroad.â€

I would have to agree with Simpson. I am by no means an expert in foreign affairs; however, from what I have learned from my attendance at the UN, it seems that Canada is not doing nearly enough to aid the ongoing humanitarian crisis in the Middle East and Europe. Nor have we done enough to address climate change and the current violation of the human rights ofÂ minorities and Canadian indigenous peoples.

As a young DeneÂ woman, I have seen and experienced oppression first-hand. Indigenous peoples from around the world are still recovering from the destruction of colonization and globalization. Many are living in dire situations. Injustice, tragedy, despair, poverty, illness, and death are never too far from First Nation lives. However, we are resilient and we are still here.

From a very young age I knew that I wanted to do something to help my people. Now that I am older, that aspiration has expanded to all peoples and to the planet’s environment. I feel like there is an urgency to help change the world. Climate change is a real thingâ€”we see it in the north quite clearly. Our ecosystems are changing. The animals are being greatly affected. The caribou herds that have sustained northern indigenous peoples for thousands of years are dramatically decreasing in population. And the communities of northerners who still depend on the caribou for sustenance are suffering because of it.

I grew up hunting, fishing, and picking berries from the land. As a child, my family and I even took a dog team to school! I love my indigenous culture. I am very passionate about indigenous language and culture revitalization. In the past few years I have been learning how to tan caribou and moose hides. I also have been learning to sew and do beadwork with my mom, Mary Code. She is teaching me to become completely fluent in deneyatiye, my (Chipewyan Dene) language. My dad Allan Code is a filmmaker and he has been teaching me for years of how to tell stories with pictures. Years ago, my parents made a film called ‘Nu Ho Ni Yeh – Our Story’ it is about the history of our Sayisi Dene people. That film has contributed so much to our community and has given the world insight into real First Nations lives and history. My parents are my greatest mentors. They have taught me so much of who I am and where I come from. They and my people have instilled in me such enormous pride, largely because of ourÂ resiliency in the face of adversity.

But just because we have survived adversity does not mean that Canadians should ignore the adversity that my peopleÂ continue to face. Aid to our communities directed towardsÂ clean water, betterÂ education,Â alleviating poverty and other goals laid out by the UN’s SDGs wouldÂ go a long way.

My home community of Tadoule Lake has one of the most highly contaminated sites in Manitoba. Tadoule is not connected to Manitobaâ€™s power grid, so diesel generators provide electricity. There are several thousand tonnes of leaked toxic petroleum hydrocarbons and polycyclic aromatic hydrocarbons caused by the tank farms used to store the diesel. The process for clean up has been slow and it is questionable whether the remediation activities are being done properly and whether all contaminants are actually being removed.

This is a human rights issue â€“ and itâ€™s urgent. Too many of my family and community members, as well as many other indigenous peoples, are dying directly because of the wilful neglect and continued oppression. Itâ€™s time for positive change.

In order to make a genuine step towards reconciliation between Canada and the indigenous people of Canada, the federal government needs to adopt and implement the United Nations Declaration on the Rights of Indigenous Peoples (UNDRIP). The UNDRIP would compel the government, at least on paper, to uphold indigenous peoplesâ€™ rights to their lands and territories and to protect them from violations like toxic contamination.

I understand that it will be up to my generation and younger generations to actively see the UNâ€™s sustainable development goals through to fruition. It is a big responsibility, but I for one know that I will try to do my part in my own home communities of Tadoule Lake, Manitoba, Whitehorse, Yukon , and across Canadaâ€™s North.

There is much more that I can say but I will leave it at that. I hope that the messages of the United Nations reach far and wide. We need the action of everyone. So thank you for reading my story! And I encourage everyone to learn more about the SDGsÂ and how you can help to change the world.

Remember to vote on October 19th!

Masi Cho! (Thank you very much!) 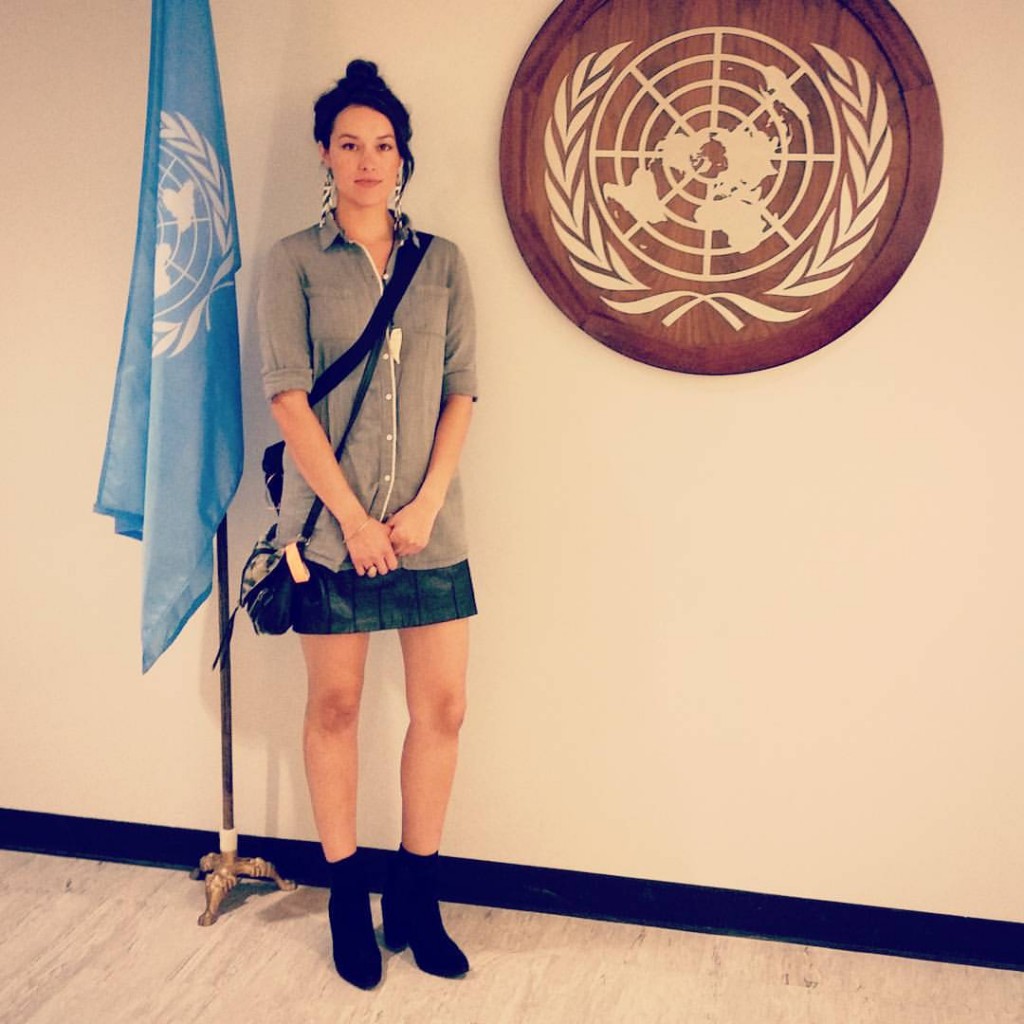