Daughters of the Vote

Thatâ€™s how I felt at the Daughters of the Vote reception in the MacBride museum. For the first 15 minutes all I could think about was if anyone else could smell the McChicken burger on my breath that I had guzzled on my way there, or that I had no idea what â€œbusiness casualâ€ meant. I was feeling nervous and shy until Shelby arrived. I could now piggyback on her conversations with people, all the while cursing myself for wearing a wool sweater and feeling very underdressed beside these classy, well-dressed older women. The free glass of Chardonnay helped. Soon enough the speeches started and they went just as you would expect: well worded and well thought out but conventional.

Then Ione Christensen got up to speak.

Donâ€™t worry, I also didnâ€™t know who she was. But I do now. In 1971, she became the first female justice of the peace and judge of the juvenile court in the Yukon. In 1975, she was elected the first female mayor of Whitehorse. In 1979, she served as the first woman to become Commissioner of the Yukon. In 1994, she was appointed a Member of the Order of Canada and in 1999, Christensen was appointed (at the recommendation of Prime Minister Jean ChrÃ©tien) to the Senate. Although many of the things she told the room about were cool, it was her spirit that sticks with me. She had this amazing energy that you donâ€™t see very often. And it was captivating. She blew everyone else out of the water, getting several laughs from the room. Obamaâ€™s first inauguration speech in 2009 withstanding, she was the first politician to make me want to hear more…to feel inspired and enthralled. 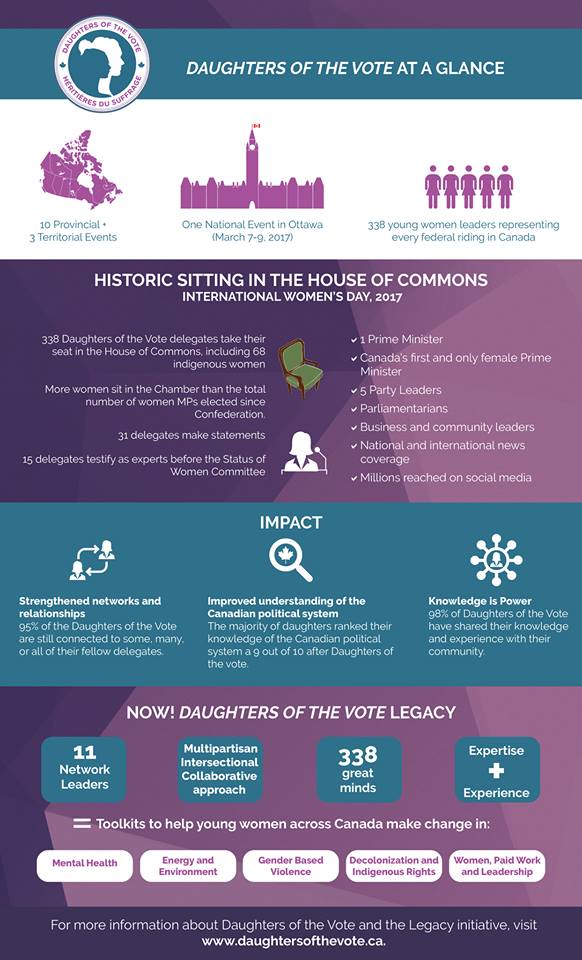 These are the words I would use to describe my impression after my day with the Daughters of the Vote. This year is the 50th anniversary of the first woman on the legislative assembly, and so even though we have gotten to a point in the Yukon where we represent 7 out of 19 members of the legislative assembly, we still have a long way to go. It has also only been 56 years since First Nations gained the right to vote in federal elections in Canada without losing status. Internationally we rank 61st in the world for women’s participation in politics. Our house of commons is 27% women, our cabinet is split 50/50, and 1 in 4 MPs are women. We heard from each female politician in the room and even though each woman had a different story of how they got into the positions they are in today, they all agreed on some key points.

There are too many barriers to participate in politics for women. If we really want to reach parity in the next 90 years (the estimate as Canadian politics stand right now), we need to take concerns about unpaid childcare, the feeling that we will never be qualified enough, and that volunteering for the community is more important than running for office seriously. These concerns were expressed across the board. More women in politics means more diverse politics, and giving girls opportunities and information on politics helps everyone in the long run. The political arena is hostile and a lot of women are reluctant to run for office, but the support and solidarity between the women that do persevere in this difficult environment is amazing. Â

What I take away from this privileged opportunity to see into Yukon politics was that politics was never something any of these women thought they would pursue. They saw that things could be better, and they wanted to help. They all had to be asked multiple times to run for public office, and it took a lot of work. But it had to be done so they and their supporters (family, friends, party members, etc.) stepped up. I am by no means trying to persuade anyone to get into politics…believe me. But it was enlightening to hear the individual stories behind each womanâ€™s journey to the position she holds.

You canâ€™t be what you canâ€™t see, but you canâ€™t see if you donâ€™t look. Get in the room so we can challenge the status quo ladies. There are no boxes to check, no qualifications, no â€œright pathâ€ to follow in life to succeed. Â Do whatever you want to do, and be whoever you want to be. But vote. Always vote. Your voice matters, and we need to hear it.